So good you’ll be cobsmacked. 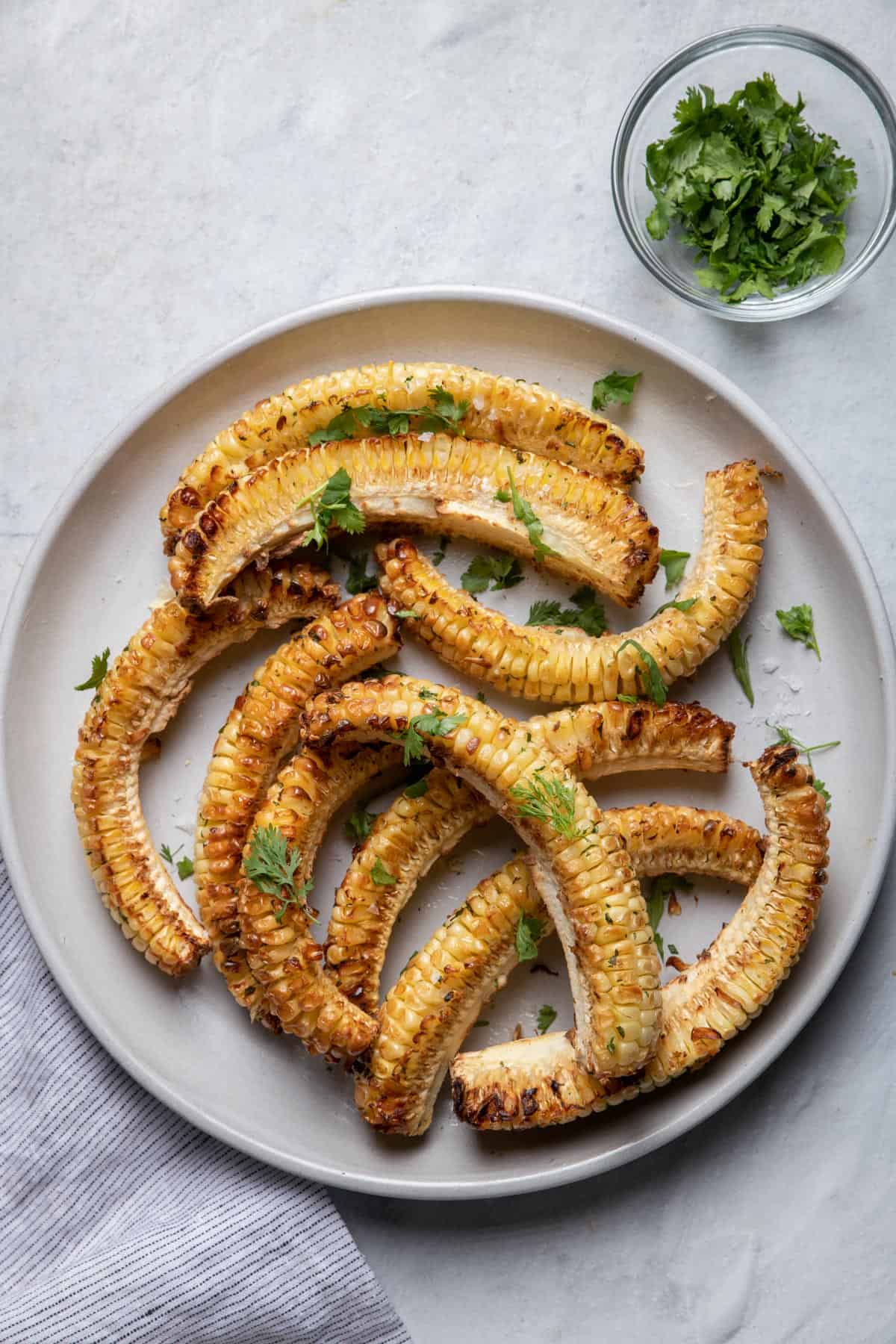 I’ve grilled corn on the cob for a long time by dash­ing some melt­ed but­ter on each ear, wrap­ping it in foil, and turn­ing it by quar­ters every few min­utes. This method takes more prep work, but it’s a lot less has­sle to serve and eat: No burn­ing your fin­gers unwrap­ping screamin’ hot foil and stick­ing in the skew­ers. Plus it’s so deli­cious I was cob­s­macked the first time I tried it. I may become a full convert!

First and fore­most: Be ye cau­tious while prepar­ing the corn! You’ll be cut­ting each ear in half the long way, then in half again, like the banana in a banana split.

Chop off both ends; make sure the larg­er end is a clean cut so you can stand it up vertically.

With a large chef’s knife or a cleaver, slice the corn in half ver­ti­cal­ly. I tried doing this with the corn lying flat; it was a lot more dif­fi­cult and it smashed up a lot of kernels.

Keep both hands above the blade: Hold the han­dle on one side and push the oth­er end of the blade down with the palm of your hand. Keep your fin­gers straight so you won’t get cut if the cob falls over or slices sideways.

If the ear is large enough, you might be able to stand each half on its end and slice it the same way. If not you can cut it lying flat but it’ll be dif­fi­cult. You can also cut the cob in half before slic­ing it both ways vertically.

Just take your time and keep your fin­gers out of the way.

Once your corn’s all sliced up it’s ready for seasoning.

The mari­nade should have an oil, then what­ev­er herbs or spices you like. I like but­ter; if I’m going to be grilling the corn I’ll use an oil with a high smoke point like clar­i­fied but­ter or peanut oil. But you can mari­nade and gar­nish any way you like!

Melt but­ter and stir in the spices. With a pas­try brush, spread the mari­nade on the corn, work­ing the herbs and spices into the spaces between the kernels.

When you’re cook­ing the corn, you’ll know it’s close to being done when the pieces start to curve, look­ing like ribs (hence the name). When it comes to how you cook it, you’ve got options!

Driz­zle the lime juice on the ribs, then sprin­kle the pars­ley, dill weed, gar­lic and PAMERZAM!