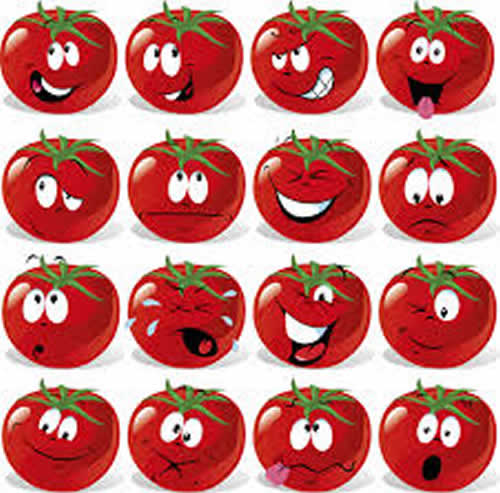 This sauce is a lot of work. It’s more than worth it.

Sautée beef and sausage; drain fat. You’ll want to chop it up to an extent so the sauce doesn’t have large chunks of meat. I like to use a Far­ber­ware nylon meat/potato mash­er. I like the sauce to be thick, but with some nice chunks of meat and toma­to here and there rather than a silky-smooth purée. YMMV.

If you use canned toma­toes, add the whole can of toma­toes along with the water and oth­er goop in the can.

I like to use toma­toes on the vine for this recipe, but any large toma­to will work just fine (Roma, cher­ry or grape toma­toes won’t work very well:

Bring a large pot of water to a boil; place a large bowl or pot of ice water next to it and an emp­ty bowl next to the ice water.

Cut an X in each toma­to (not on the end with the stem, the oth­er end).

Put two or three toma­toes at a time in the boil­ing water and let them boil for a cou­ple of minutes.

Remove them from the boil­ing water and drop them into the ice water for a minute or so.

Take the toma­toes from the ice water and peel them, start­ing with X you cut into the bot­tom. If the skin doesn’t want to come loose, boil and ice the toma­to again. It will take a bit of fid­dling with the process, but once you get the hang of it the skin will slide off most­ly in one piece.

So! Now you have a big bowl of skinned toma­toes. If I was Martha Stew­art or this was a Cor­don Bleu class, the next step would be to core each toma­to with a chef’s knife to ditch the seeds and that nasty stringy thing in the center.

You can cer­tain­ly do that if you want, but I’m not a Cor­don Bleu teacher and I’m sure as hell not Martha Stew­art, so here’s how I do it:

I don’t care if the seeds get in the sauce; I just want to get rid of that nasty stringy hard thingy in the mid­dle. So I grab a toma­to and just crush it with my fin­gers, rolling it around and squeez­ing hard.

The parts you want to put in the sauce will smoosh and ooze and squirt out between your fin­gers, and before long you’ll have just that nasty hard stringy core thingy left.

Okay, so why go through all this extra effort instead of using canned tomatoes?

I’m not one of the GMO-pho­bic folks you see online rant­i­ng about Mon­san­to, but I do enjoy cre­at­ing ingre­di­ents by hand if time and mon­ey allows. Canned toma­toes are gonna be salty; PCBs and preser­v­a­tives and oth­er stuff will leach into them.

But it’s not just that. I tend to appre­ci­ate and enjoy things more when I’ve put in some work rather than buy­ing it in a can or box or what­ev­er. Call it a labor of love.

No guilt, though: Like I said a cou­ple of times before, YMMV.

Once you’ve got every­thing in your big Dutch oven or stock pot, sim­mer it, uncov­ered, for 1 1⁄2 to 2 hours.

While it’s sim­mer­ing, stir it fre­quent­ly. I don’t mean every 15 min­utes or so between episodes of Robot Chick­en; I mean fre­quent­ly. A lot. Almost nonstop.

Why? Because this sauce is eager to stick to the bot­tom of the pot and burn, leav­ing behind a bad taste and grue­some residue you prob­a­bly won’t enjoy scour­ing out of your cookware.

There’s a bet­ter method, though:

Gen­tly bring to sauce up to a sim­mer, leav­ing it uncov­ered and stir­ring fre­quent­ly, until the toma­to paste has all dis­solved and your kitchen smells so good it’s attract­ing Gui­dos from all over the East­ern seaboard and you’re fight­ing them off with a base­ball bat. This usu­al­ly takes me about 15 min­utes, but your nose will let you know.

Remove the pot from heat and cov­er. Let it cool for a while, then trans­fer the luke­warm sauce to a slow-cook­er crock, cov­er, and stick it in the fridge overnight.

The next day, pull out the crock and voilà: The grease and fat will all be sit­ting on top, cooled into its own tiny lit­tle fat­berg. Spoon it all up and get rid of it, then put the crock back in the slow cook­er. Put it on low heat and let it gen­tly sim­mer as long as you like.

Now you can spend as much time mak­ing home­made pas­ta or watch­ing foot­ball or what­ev­er else you want to do until suppertime.

I solemn­ly and for­mal­ly swear: If you put in the effort this recipe demands, your dili­gence will be reward­ed so rich­ly you’ll nev­er again want to set­tle for stop­ping at Safe­way and snag­ging a jar of Prego or Ragu or whatever.