Mamas, don’t let your babies grow up to be potatoes. 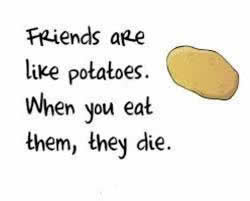 In a skil­let, cook bacon until crisp; remove to paper tow­els to drain. Save drip­pings, because you’re smart enough not to throw away bacon fat.

In a mix­ing bowl, beat egg yolks until light, about 2 minutes.

Beat in onion, mus­tard and pep­per. Place pota­toes in a bowl; fold in egg yolk mixture.

Set aside 2 tbsp. bacon. Fold in cheese, pars­ley, and remain­ing bacon into potatoes.