If you’re a hor­ror movie fan you’ll love this recipe: By the time you get the turkey in the oven, your kitchen will look like Jef­frey Dahmer’s apartment. 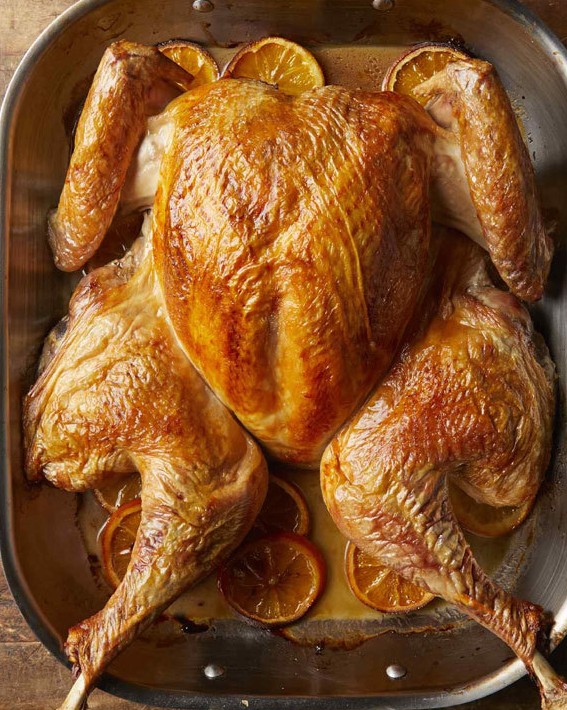 It's not a frog; it's a turkey. No Kermits were harmed during the production of this recipe.

Let’s get the Beav­is and Butthead por­tion of the show out of the way:

Where’d the word spatch­cock come from? No offi­cial answer; some think it’s Irish and short for “Dis­patch the cock!” This alleged­ly refers to killing a chick­en, but to me it sounds a lot more like slang for “Unzip yer pants!”

If spatch­cock refers to chick­en, should it be spatch­gob­ble for turkey? Hell, I don’t know. If you’re done tit­ter­ing over the word, can we get to the food?

Spatch­cocking is like but­ter­fly­ing, but not like slic­ing a steak down the mid­dle hor­i­zon­tal­ly; it’s split­ting an entire bird almost in half like it was a vic­tim in an Alien or a Saw movie.

Speak­ing of which: If you’re a hor­ror movie fan you’ll love this recipe: The turkey will be hacked open with its spine chopped out. By the time you get it in the oven, your kitchen will look like Jef­frey Dahmer’s apart­ment.1 It’ll be worth it; I promise.

The two best turkey recipes I’ve ever pre­pared are deep-fried turkey and spatch­cocked turkey: They’re both more ten­der, more juicy and much faster than Nor­man Rock­well-style turkey. Deep-fried is a tidge bet­ter than spatch­cocked, IMHO, but it’s more work, more expen­sive and a lot more dan­ger­ous. If you don’t want to mess with all that, try spatch­cocking it. You’ll nev­er go back.

Kill It: Removing the Spine

Thaw the turkey com­plete­ly; if there’s any frozen stuff inside it will be far more dif­fi­cult, if not impos­si­ble, to spatch­cock it.2

Take the rack out of the bak­ing sheet or roast­er and put in the turkey, breast side down. With a chef’s knife, slice down both sides of the spine, through the skin and mus­cles, until you feel the ribs.

Start­ing at the neck, use the poul­try shears to cut through the ribs on both sides of the spine (do not, repeat NOT, try to do this with a knife unless you fan­cy a trip to the ER). When you get through the last cou­ple ribs you might have to pull the spine up and twist to get it out. The ribs will be sharp, so you’ll want to use a kitchen tow­el or some­thing to pro­tect your hands.

Now it’s time to crack the breast bone. Why? Because you want the turkey flat­tened as much as pos­si­ble so it will cook faster and more even­ly. Flip the turkey back over and spread out the wings and legs. Push down on the breast bone, like you’re giv­ing the turkey CPR, until it breaks.

This takes more effort than you might think: You can’t push down very hard with the turkey up on the counter. You could stand on a chair or some­thing, but here’s how I do it:

I put the bak­ing sheet or roast­er on the floor. Now you can bear down on it, but you can make it even eas­i­er: Put a cut­ting board on the breast and stand on it. If that doesn’t do the trick, bounce up and down a few times. Before long you’ll hear a loud crunch and you can proceed.

Kill it Some More

Okay! Take a few pho­tos of the spine and neck and the turkey on the bak­ing sheet, flat as a sail­cat.3 Lat­er you can post them on Face­book or Insta­gram and steal my joke about Jef­frey Dahmer’s apartment.

Put the rack back in the bak­ing sheet and put the turkey on it, breast side up. Arrange the legs and wings so nothing’s hang­ing off the sides and it’s as flat as pos­si­ble. It should look more like a frog than a turkey.

Pat the turkey dry if need­ed and brush the veg­gie oil over it. Dust it with salt and pep­per and put it in the oven, uncovered.

Roast at 375°, turn­ing the bak­ing sheet every half hour. From here it’s just like a Nor­man Rock­well-style recipe: It’s ready when a probe ther­mome­ter insert­ed deep in the breast or thigh reach­es 165°, but you want to take it out at 160°, cov­er it loose­ly with foil and let it rest; it will coast on up to that mag­ic num­ber: 165°. The dif­fer­ence is that it will get to 160° a lot faster; usu­al­ly between 90 min­utes and 2 hours; so ya got­ta keep an eye on that thermometer.

When it’s clos­ing in on 140°, brush it with oil again and sprin­kle the chopped pars­ley, sage and rose­mary even­ly on all surfaces.

Here’s my favorite thing about spatch­cocking a turkey: It cooks even­ly and the skin is per­fect: You won’t have a turkey that’s dried up and burned on top and sog­gy with grease on the bot­tom; the skin will be crispy and savory and the meat will be moist and tender.